Conwy Town Council were very sad to say goodbye to a dear friend, our Parade Marshall, Mr David Williams. (Major Retired), the Council held a short ceremony for David on Monday 31st January 2022 to say farewell and present David with a framed copy of Edward 1’s 1284 Charter for Conwy.

David has been our Parade Marshall since the 1990s and has performed on every occasion for over 30 years. In that time, he has mustered the Mayor and Councillors into line and then marched them through Conwy. He would drop from the front to the back of the Parade, and then up again, and march with us with the most immaculate timing, and an even more wonderful twinkle in his eye!

At Remembrance Parades in front of the Cenotaph,  David ensured that all the participants laid their wreaths in the correct place. He particularly looked after the youngsters who maybe had never done it before. Such kindness will remain with them, so that they will have happy memories and realise the importance of the ceremony.

But of course, David was well trained to herd us all, as he was a full time soldier. He was in the Royal Corps of Transport and then later went on to the Military Provos Staff Corps.  He left the army in 1986 and went to work as Security at Hotpoint in Llandudno Junction.

David carried out 16 years of voluntary work with the Army Cadet Force becoming Detachment Commander in Conwy. He then took a Commission, becoming a Major and their Area Commander.

David is leaving North Wales to go and live in the Royal Hospital Chelsea and is going to become a Chelsea Pensioner. This is such a different life for David, but a brilliantly brave and exciting move. He will be greatly missed by his many friends in Conwy and of course, this Council. We wish him all the luck and happiness in his new beginnings and thank him for all his wonderful years as the Parade Marshall and his service to the town and Conwy Town Council. 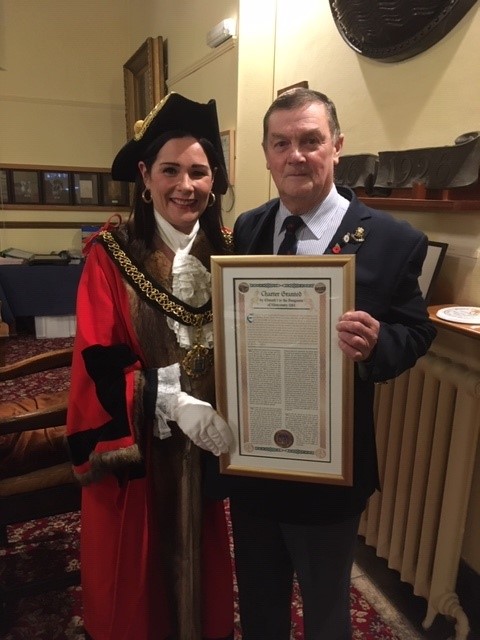 The Remembrance Sunday Service will begin at the Cenotaph, Bodlondeb....

The 2 Minutes silence will be held at Lancaster Square at 11am....